Dokumen
DOKUMEN
» ARTIKEL » Energy and environment in harmony: From innovation to reality
Senarai Artikel
Energy and environment in harmony: From innovation to reality
Irina Harun
It is said that human civilization sparked to life with the discovery of fire. The discovery and manipulation of fire by early men was a point of cultural advancement in human evolution where they had the means to cook food, heat their bodies and gain protection from the wilderness. Closer to the modern times, economic historians agreed that coal was the heart of the Industrial Revolution, and petroleum had been credited with the never-before-seen exponential development progress in the second half of the nineteenth century. This underlines the amazing influence of energy towards the many aspects of our lives.

However, there are hidden costs to energy that most people have taken for granted. Behind every flick of the light switch, every drive to the office, every sip of coffee and the nightly Netflix binging is the fact that much of this energy is generated from non-renewable resources and through processes that emit pollutants and greenhouse gases to the atmosphere. In 2020 alone, the carbon emission by the energy sector amounted to 73.2% of global carbon emission. This means that almost 37 billion tonnes of CO2 were released by this sector alone, through the generation of electricity and heat, as well as in transportation.

But not all is lost. Technological advancement and innovations which progressed hand in hand with the easier access to energy and better standards of living, had seen better energy efficiency achieved in modern electricity generation processes and the opportunity to use alternative resources to feed the global energy demands. Discovery of alternative fuels to mitigate the adverse impacts of fossil fuels, the increasing efficiency of solar photovoltaics (PV) for electricity generation, the utilization of thermal energy such as ocean thermal energy conversion (OTEC) and the deployment of hydrogen fuel cells in automotive are some of the potential solutions to the modern energy trilemma of security, affordability, and sustainability.

Solar energy is one of the most popular alternatives to conventional coal-based electricity generation. Through PV cells, sunlight can be transformed into electricity in a highly efficient electrochemical process. Its modular nature also enables these solar panels to be installed quickly, depending on the capacity required by the consumer. In Malaysia, many initiatives had been offered by the Government including tax incentives for businesses and industries who chose to adopt solar energy into their operations – all towards the aim of increasing the renewable energy (RE) mix in its installed capacity to 31% in 2025 and 40% in 2035. There is also an initiative called Feed-in Tariff where the extra electricity generated beyond consumption can be sold back to Tenaga Nasional Berhad., at a determined rate.

Solar energy can also be utilized in another manner. Microalgae are simple photosynthetic organisms that utilize sunlight and carbon dioxide to produce biomass and oxygen. These remarkable unicellular microbes were the source of what is now known as petroleum, produced through a chemical process that took millions of years underneath the Earth’s surface. Hence, there are vast potentials for microalgae biomass to be utilized in the production of biofuels such as biohydrogen, biodiesel and crude algae oils, other than its traditional usage in agriculture (as fish and shrimp feed), food (Spirulina, Chlorella, and seaweeds) and pharmaceuticals (astaxanthin, β-carotene, and omega-3 fatty acids). As the algae grows by fixing CO2, it produces lipids that can be extracted as crude oil, and further processed as biodiesel. This property also allows algae to be used in carbon capture and utilization (CCU) initiatives especially, to reduce the carbon footprint of conventional coal-based electricity generation. 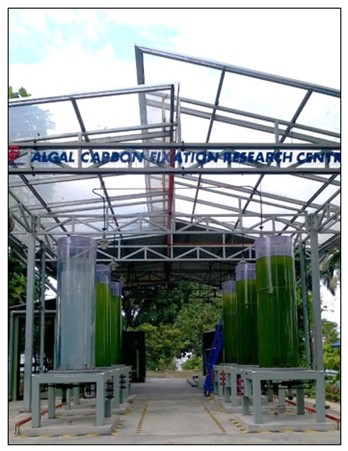 Algae may also be used in fuel cells to generate electricity from air, doubling as attractive decorative pieces that speaks to modern aesthetics. Algae fuel cells may also be used in future smart wearables, to essentially operate from minute concentrations of water and CO2 available in its immediate vicinity. And while these exciting developments are still under research and has yet to reach maturity, the use of algae for air purification has already been developed by many designers looking at embedding sustainability thinking in their designs. 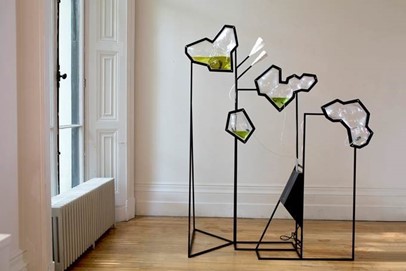 To achieve sustainable development, the energy sector has to be revitalized with new, innovative options that are not only sustainable, but also affordable and accessible to all. And despite the many options made available through R&D, there is no one single solution to the energy problem. Only depending on solar may reduce our dependency on fossil-based electricity generation, but the current transportation sector is still very much dependent on liquid fuels. The use of renewable energy options such as wind and hydro, while having minimal carbon footprints, are location-specific and will require complete infrastructure for electricity generation, transmission, and distribution. This indicates that an integrated approach utilizing mixed-RE electricity and carbon-neutral fuels is very much required to ensure that we can achieve the sustainable development goals set by the UN.

As said by the former UN Secretary General Ban Ki-Moon, “Energy is the golden thread that weaves together economic growth, human development and environmental society”. Therefore, we all must play a part. All actions matter, be it individuals, organizations, governments, and the world in general. While turning on the lights, drinking coffee, driving to the office, and binge-watching the latest shows, take a minute and think. What you chose to do daily does matter, and collectively we can make the change.