Population growth constitute a major factor that influence food security. By 2050, agricultural production needs to increase by 60% to sustain global food requirement for an estimate population of 9.7 billion people. Together with livestock raised for food, the demand for feed ingredients is also likely to become a considerable issue. Increase in food and feed demand will resulted in more pressure towards natural resources and ecosystem due to overexploitation of land and water for agriculture and livestock production. Consequently, these may lead to destructive environmental impacts causing land degradation, water shortage, agrochemical pollution, greenhouse emissions and biodiversity loss. With the declining resource availability, concerns are growing whether natural resources able to meet the food and feed demands. Thus, the quest to explore alternative food sources for human and feed for animals is pertinent. In recent years, insect farming has become a spotlight as an alternative food source due to its environmental benefits.

Insects are the most diverse organism on our planet that provide vital ecological services such as pollination, decomposition, and biological control. Besides their significant ecological functions, insects have been identified as an important source of sustainable raw materials for human consumption and animal feeds. The consumption of insects (entomophagy) form part of traditional diets around the world. Insects are considered as a healthy food source as they provide high nutritional value of protein, fat, minerals, vitamins, and fiber. Insects have also been used in aquaculture and poultry as they fulfill the dietary requirements of many animals. Moreover, high-feed conversion efficiency of insects and their organic rearing is a remarkable example of bioeconomy. Insects can be grown using by-products or organic waste from agriculture and food waste while decreasing environmental contamination. Compared to livestock raising, insects require less environmental resources and emit relatively low greenhouse gasses. Despite their advantages, consumer acceptance remains a significant challenge to promote insects as an alternative food source. Insects also remain underutilized in animal feed industry due to lack of financial assistance and technical challenges that render them profitable and applicable in feed sectors. 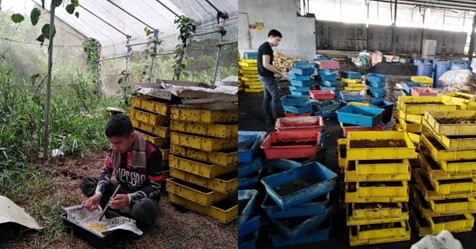 Insect farming industry is growing over the years with an expected value of USD 8 billion by 2030. Insect farming involves rearing and harvesting insect for various purposes mainly for animal feed and human consumption. Insects have also been incorporated as raw materials in pharmaceutical and cosmetic such as honey, a by-product from bees. However, farming and eating edible insects is still a relatively new idea worldwide especially in Malaysia. Here, insect consumption is not a foreign concept as the practice is associated with traditional and indigenous cultures. Rural communities consume sago grubs, larvae of the palm weevil (Rhyncophorus ferrugineus) which is considered as a local delicacy in western Sabah. In Kelantan, edible grasshopper is prepared by frying adult’s insects with turmeric and spices as an exotic snack. Other edible insects in Malaysia also include large scarab larvae, cricket, and termites. With the growing concern for a sustainable food production and healthy lifestyle, edible insects are currently becoming the new sensation in the food industry. Recently, edible insect product using roasted cricket and cricket powder based on different flavorings has been commercialized at local and international level. In addition, insect fats have also been proposed as an alternative for butter. 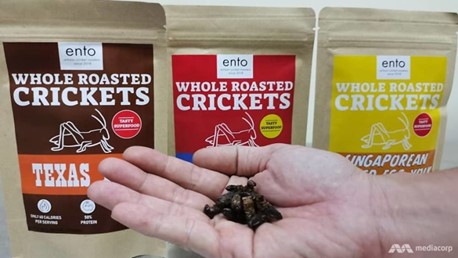 ENTO products owned by Mr. Kevin Wu has embark the commercialization of roasted cricket based on different flavoring (Image credit: Amir Yusof)
Insects are consumed by many animals that include free-range poultry, fish, and birds. Therefore, promoting insect for animal feed have become the central attention for sustainable feed production. Some of the important insect protein used for animal feed are the black soldier fly (Hermetia illucens) and the yellow mealworm (Tenebrio molitor). Many studies have highlighted the benefits of insect protein that contained better nutritional values due to the presence of bioactive compounds and chitin that boost animal immune system. Farming insects also include the organic system where various waste materials from agriculture and food production are used for rearing, an excellent example of a sustainable bio-circular economy. Moreover, the waste from insect production that consists of frass and exuviae can also be converted into biofertilizer to improve agricultural productivity. 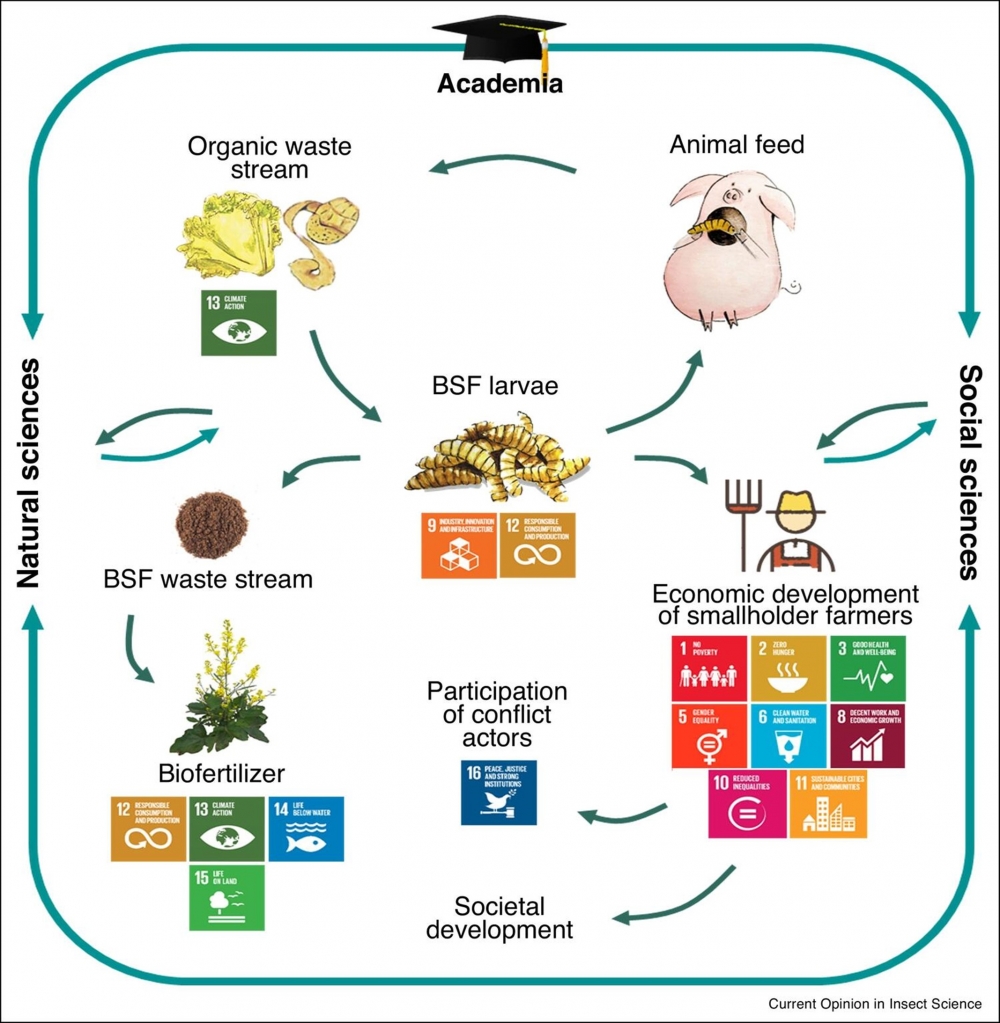 Framework showing the circular agriculture based on the production of black soldier flies (BSF) as feed and biofertilizer (Source: Barragán-Fonseca, K. Y. et al. (2020).
Despite all the advantages of insects as an alternative for food and feed production, consideration on the safety of animal feed and human food must be made. Insects exposed to contaminants in industrial, indoor facilities may cause more hazards than benefits. Organic waste used for insect rearing may be contaminated by agricultural waste and accumulate pesticide residuals exposing new risks from consumption. Therefore, setting up a food-grade production for insect protein must comply feed legislation at each country. As a conclusion, edible insects offer an alternative solution towards a sustainable food production on our planet. However, several issues need to be addressed to promote edible insects as a promising healthy food that can ensure global food security.
References
Barragán-Fonseca, K. Y., Barragán-Fonseca, K. B., Verschoor, G., van Loon, J. J., & Dicke, M. (2020). Insects for peace. Current Opinion in Insect Science, 40, 85–93.